“The last enemy to be destroyed is death” (1 Corinthians 15:26). The inscription shows up in old graveyards, including on the fictional tombstone of Harry Potter’s parents. The author of the series, J.K. Rowling, lost and grieved her mother while the first book was written and declares that dealing with death is one of the themes of the books. The Bohanan family is eagerly awaiting the final film in the cycle.

With the grief we have recently experienced in the Bethany family, I have returned over and over to the Bible and the biblical theology of resurrection. (This is the theme of Dave Snyder’s Sunday School course Surprised by Hope: Rethinking Heaven, the Resurrection, and the Mission of the Church.) Resurrection is promise for the human BODY. Death is not destroyed by some ghostly after-life. Death can only be defeated if dead bodies are resurrected – indestructible – to new life. And, not in some zombie-like state but in glory and beauty.

As imaginative as popular culture can be about immortality and life-after-death (see, for example, Ghost or Interview with a Vampire), it struggles to hold a candle to the biblical promise, to the stranger-than-fiction truth of resurrection. We may appreciate the romance or suspense of a good film or book (I certainly do), but the greatest story ever told, and the truest, is Easter – Jesus resurrected, the “firstborn of the dead” (Colossians 1:18, Revelation 1:5) and the “firstborn of a large family” (you and me! Romans 8:29).

Email ThisBlogThis!Share to TwitterShare to FacebookShare to Pinterest
Labels: reflection

We had a special program for Sunday School on Father's Day, a word from Robin! Thanks to Robin for sharing, thanks to Jana and Rachel for musical leadership, thanks to Lucy for coordinating things!
Posted by JP Bohanan at 10:58 PM No comments:


Thanks to the ladies for preparing a marvelous roast beef dinner. The food was great and the fellowship at the table was wonderful. [Pics taken with camera phone]
Posted by JP Bohanan at 10:52 PM No comments:

Email ThisBlogThis!Share to TwitterShare to FacebookShare to Pinterest
Labels: news

The Knock at the Door, and the cleaning product saleswoman

The Beggar on the Street
A judgment: “He probably makes more than me”

The Beggar in the household, children obsessing
My reaction: NO!!

“Those that would be rich in grace must betake themselves to the poor trade of begging, and they shall find it a thriving trade” (Matthew Henry, cited in Bruner, 342).

For us, this kind of asking is rude, “troublesome and disgusting”, but with God, “not to come asking eagerly is displeasing” (Bruner/Chrysostom, 344).

Story: Slugs for Sisters
You who are EVIL
Give GOOD things – any good thing in Scripture, God’s will
“The secret of prayer is not the disciples ‘much’; it is the Father’s ‘much more’” (Bruner, 343).

Have you ever been overwhelmed by something that you cannot touch, at least not in a conventional way? Perhaps by an emotion – grief, joy, anger, peace? Felt yourself immersed in something bigger than you, more powerful than you? Have you ever felt yourself connected to another person, not simply by being near one another or even by being in love or “in like” with each other – but connected at the core of who you are, connected at the level that goes beyond words, beyond touch? We are made for that kind of connection. And when we experience it, it is a glimpse of what God wants to have with us every moment. In Ecclesiastes, we are told that “God has put eternity in the human heart” (Ecc 3:11, NIV). Saint Augustine writes, “Our hearts are restless until they find their rest in thee” (Confessions). One of the biblical expressions for this connection, for which God has designed us, for which we long, is being “filled with” or “baptized with the Spirit”.


The Pentecost story is mind boggling. The Spirit comes in wind and fire. The disciples find themselves speaking a variety of languages they have never learned. People are in town from every nation and they hear the story of “God’s deeds of power” in their own language. The story is weird and really cool. What particularly amazes me is that the miraculous demonstration – the speaking in many languages – was not clearly understood as a sign of the Spirit of God. (Some folks thought the disciples had too much to drink.) But, what they said in those languages was clearly understood, “God’s deeds of power.” You see, while God desires direct and personal connection with each of us, the gifts of God are not about us being worthy of the gift, but about us fitting into God’s purpose in the world. Today, we’re going to focus on the story of preparation for Pentecost. And what can we do to get ready for this gift?

This summer, the Hosier family will depart the U.S. for a two-year Individual Volunteer in Mission opportunity in the Middle East. Rev. Lenore Hosier, currently serving at St. Paul UMC in Chambersburg, will be appointed to extension ministry through the Susquehanna Conference. Lenore, her husband Rob and their fifteen-year-old daughter Rebecca will be going to the Bethlehem Bible College to work alongside of Rev. Alex and Brenda Awad, missionaries with the United Methodist General Board of Global Ministries serving the Bible College and a local, English-speaking church in Jerusalem. They will be living in the Bethlehem area, and Rebecca will be attending high school there.

Pastor Lenore went to the Holy Lands in 2006 as a seminary student and then returned two years later with GBGM as the Conference Mission Ambassador. Since then, Lenore has returned eight more times, and the rest of the family has been over many times, as well. They all have developed a love for the land and the people. In the next two years, they hope to learn the language and much about the culture as they serve Christ in this troubled part of the world.

Due to the increased unrest in the Middle East, visas have become even more difficult than usual to obtain for extended travel in Israel and the West Bank. If unable to acquire the needed visas, the Hosier family has been offered other options through GBGM serving in the extended connection through the worldwide Methodist Church. They remain open to serving as IVIM wherever God opens doors.

Those interested in learning more about the Hosier’s experience can contact Pastor Lenore at lhosier@susumc.org  The Hosier family is very interested in sharing first-hand stories and also in encouraging others of all ages to become involved as Volunteers in Mission, both short-term and long-term. Feel free to contact them for information. (From the website of the Susquehanna Conference of The United Methodist Church.)

Posted by JP Bohanan at 4:24 PM No comments:

Email ThisBlogThis!Share to TwitterShare to FacebookShare to Pinterest
Labels: mission


One of our pastors in the Susquehanna Conference is heading to Bethlehem with her family for two years of volunteer mission work. This is an interview with her daughter, who raised funds for playground equipment for Palestinian kids.
Posted by JP Bohanan at 4:16 PM No comments:

Email ThisBlogThis!Share to TwitterShare to FacebookShare to Pinterest
Labels: mission

I just love this short story. Jesus’ adversaries are trying to catch him up, through Peter in this case. We know how the constant pressure of media attention exposes every flaw of our public figures. While Twitter, Facebook, and the 24 hour news cycle weren’t features of the first century world, Jesus was under incredible scrutiny every moment . . . and under the pressure of people who looked for ways to make him fail. Peter realizes he’s put Jesus on the spot, made an assumption in public, and Jesus doesn’t chew him out. Instead, Jesus bails him out.

And the question was taxes. You’d think that a couple thousand years later, we might have gotten past that question! But, no, we still talk taxes – deficit, stimulus, lockbox, progressive, regressive, tax and spend, fiscal conservative. What we really want, though, hasn’t changed. We want all the benefits, without actually paying taxes. “From whom do the kings of the earth collect taxes? From their children or from others?” Duh! “From others!” “So, the children are exempt [free]” (17:25-26). That is, the kids get the benefits of the taxes without paying a thing. They are privileged.

And, these taxes are taxes to the temple, thus taxes to God. The unspoken question in the story is . . . “And who are God’s children?” 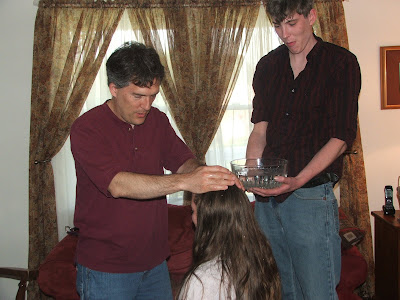 Congrats to Bri, baptized at a small group gathering.
The baptismal vows:


Do you renounce
the spiritual forces of wickedness,
reject the evil powers of this world,
and repent of your sin?
I do.
Do you accept the freedom and power
God gives you
to resist evil, injustice, and oppression
in whatever forms they present themselves?
I do.
Do you confess Jesus Christ as your Savior,
put your whole trust in his grace,
and promise to serve him as your Lord,
in union with the church
which Christ has opened to people
of all ages, nations, and races?
I do.
Read more »
Posted by JP Bohanan at 8:24 PM No comments: 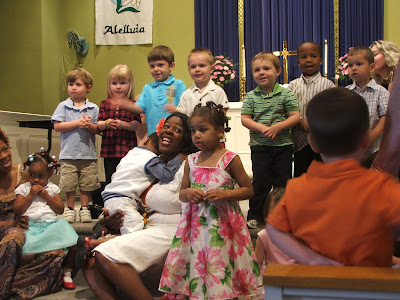 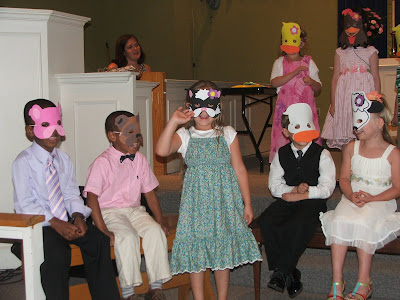 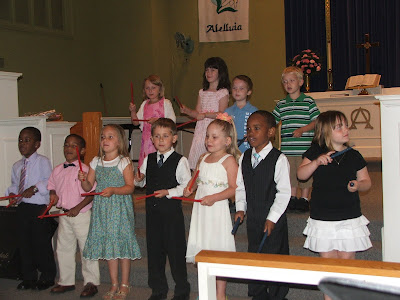 We celebrated the Bethany Christian Learning Center on Sunday June 5 in both worship services, with breakfast served during the Sunday School hour. Congrats to all, and thanks to Wanda, the BCLC staff, the parents and volunteers, for another great year!

Posted by JP Bohanan at 8:12 PM No comments: